Where should I store my photos? I’m asked this question a lot. On the road, my wife, Madeline, and I use portable hard drives and flash drives. But at home we use external hard drives. And we back up all of those portable and home drives to the cloud.

Those are short answers and probably create more questions. In this post, I’ll discuss storage needs; options for home, travel and backup; and their pros and cons.

How Much Storage Do I Need?

First thing’s first: Photos take up a lot of space. But how large is an average photo? That depends on when and with what device you took the photo. And we need to know the difference between a photos resolution and its size.

Let’s start with how a digital photo is constructed. When you take a picture or scan a photo to digitize it, the resulting image is made up of pixels, which are colored dots. Each pixel can be one of 256 colors. A photo has a dimension expressed in pixels. Ever see 800 x 600 pixels or 2048 x 1536 pixels? The first number represents the width of the photo in pixels and the second number the height.

It’s important to remember, you don’t have to take pictures on a phone or camera at the maximum capability. You can adjust the setting to take photos in smaller resolution. Instead of shooting at a max of 5184 x 3546 pixels, you can set it to shoot at 2048 x 1536 pixels.

How many megapixels do you need? That depends on what type of print you want to make to preserve the picture. A typical 4x6 picture needs only two megapixels of resolution. An 8x10 requires seven megapixels. If you want to hang a 12x14 print on your wall, that photo needs to be 15 megapixels. The 16x20 family portrait you want in your living room needs close to 30 megapixels.

Also, if you work with your photos a lot, you’ll want a higher resolution. What do I mean by work? If you like to do a lot of editing, like removing power lines or people from a landscape photo. Or maybe you use your photos for a business or as art. And if you want to zoom in to create a photo of a closeup of a flower or animal, you’ll need more resolution.

Keep in mind, too, higher resolution photos are bigger in size. That means longer upload times to send photos via messaging and social media or to upload or download them to the internet. And some messaging services and social media limit the size you’re allowed to send or upload. If you shoot in high resolution, you might have to resize them for smaller size.

Note: Pixel often is abbreviated as px or PX. So, you might see someone write, “The photo is 1024 px wide.” Likewise, megapixels is abbreviated as mp or MP. Samsung advertises their new Galaxy S20 phone as having a 64 MP camera. For this post, I won’t abbreviate pixels or megapixels. In the next section, I’m going to discuss photo size expressed in bytes and megabytes. With the abbreviation for megabytes being MB, I want to minimize confusion.

Now we can talk about size, or how much space on a computer drive a digital photo takes up. As the resolution of your pictures improves, your photo size increases and takes up more space. In other words, the more pixels you pack into an image, the bigger the image is, and the more space you need to store it.

Digital file size is expressed in bytes, which are units of computer information. Because bytes are so small, one file quickly can grow to millions, billions or trillions of bytes. Below is a how we refer to those sizes:

If you assume your pictures could be 10 MB, you could fit 100,000 photos on a one TB drive. You will likely need an external drive for your computer because you’ll need a lot of storage as you produce and save photos.

Luckily, the price of storage has significantly dropped over the years. For the past four decades, storage prices have gone down from around $500,000 per gigabyte in 1981 to less than $0.03 per gigabyte today!

I’ve purchased quite a few external drives over the years and continue today. An average external drive will run for between three and seven years.

What Do I Need?

Now you know about photo file size and space needs, here are the devices and services you need.

If you travel and want most of your data to travel with you, you’ll need a portable external drive. These drives are categorized many ways. But the easiest way to classify them is by drive type: 1) solid state drive (SSD); or 2) spinning disk or hard disk drives (HDD). In the old days, these drives held 256 MB of storage. Today, you can purchase drives of 256 GB or bigger. SSDs are memory with no moving parts. Instead, they have chips that store your data. Without moving parts, they are more reliable of your taking it with you. And SSDs are more compact. 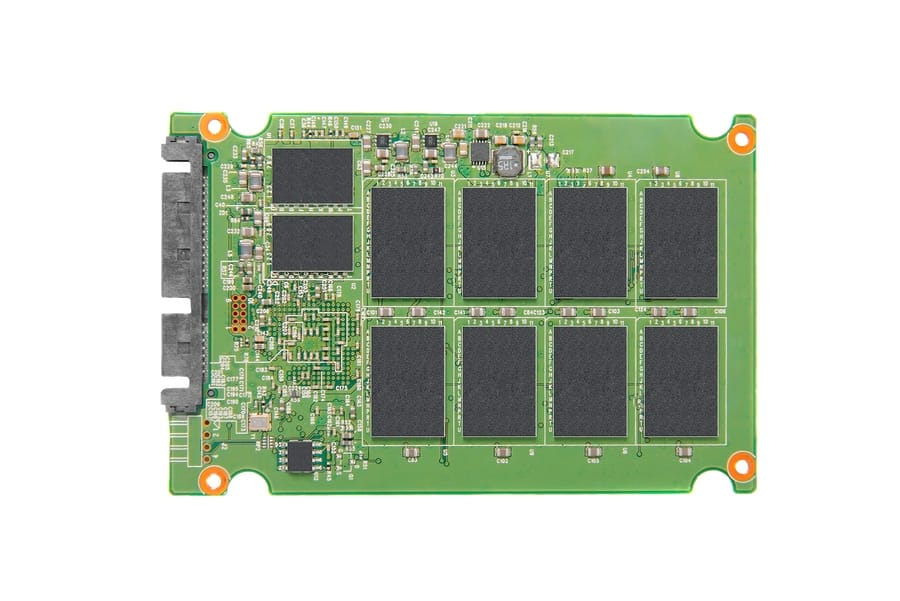 An HDD has multiple platters that spin really fast. An arm reaches out to the specific area and reads the data you’re looking for. (Think of it as a record player for data.) SSDs are more expensive than HDDs per GB of storage. But SSDs are also much faster than HDDs.

An SSD (left) can be much more compact than an HDD

Today, HDDs average two to three cents per GB. SSDs average 25 to 30 cents per GB. As a result, we use SSDs carefully and usually just for the hard drive on the PC so that apps run faster. For storage, we always use HDDs.

The average life span of an HDD is three to five years. I know, that seems like a short lifespan. But an HDD constantly spins around 7200 RPM for that time period. I backup my data several places, so I can get more time since I know my data is safely protected.

On the road, my wife, Madeline, and I use the Samsung T5. Madeline uses a MacBook Air, and I use an HP EliteBook 840 G5, so we each have a Samsung T5 formatted for our computers.

If you use PCs and Macs and you share photos between devices, it can cause some problems. Mac and PC formatting is not the same. Enter a network attached storage (NAS) drive. A NAS drive is accessible from any of your computers on your home network. It has several advantages: it uses RAID to guarantee your data is safe and allows you to add storage when you need it.

You can expect a hard drive to last between three and five years. With a NAS drive, you can implement something called redundant array of independent disks (RAID). This is something you can configure on your NAS drive. With RAID, data is distributed across multiple drives. There are many ways to do this, with there are pros and cons of each method. The different methods are numbered, so there is a RAID 0, RAID 1, and so on. The higher the RAID number, the more protection. But there are tradeoffs between protection and speed. The higher the protection, the slower the speed. I recommend RAID 5 for any home NAS drive. It’s the best combination for protection and speed. With RAID, you’re buying more disk than you need because some of it is used for backup. NAS storage isn’t cheap. But when you compare its cost to the slower and more expensive monthly cost for public storage, a NAS drive starts to look better.

I use the Synology NAS 418j system, which is diskless. I thought the idea of buying a storage system that has no storage was crazy. But you can decide later how big you want to make it. This model is a four-bay storage enclosure, and then you can put in from one to four drives inside. I recommend they are compatible in size.

One TB drives go about $60, and four TB drives run double that.

I recommend starting with two four TB drives. That’s enough for most people, but you can add more, if needed. For $120, it’s a great investment in storage. And with RAID technology, your data is safe. Configured for RAID 5, your data will be very secure.

We can’t talk about data storage without talking about data backup. Even if you run a NAS drive with RAID 5, you’re still vulnerable to catastrophic events like theft, flood, fire, tornados or earthquakes and other family disasters. A good friend of mine religiously backed up their data in multiple places in their home. But when an accidental fire burned his home to the ground, all of his family photos and video and files were gone.

I recommend you backup your information to a cloud vendor. I use Backblaze to back up my data to the cloud. Backblaze offers a fixed price for as much storage as you have attached to your computer. And the data is accessible anywhere in the world. If you lose something, you just go to the cloud and find it again. And it doesn’t matter where in the world you are. (As long as you have an Internet connection!)

For home storage accessible by Macs and PCs, get a NAS drive with multiple bays, so you can add more storage when you need it. And protect your NAS drive with RAID 5 technology.

For backup, use a cloud service, such as Backblaze to ensure you have your data copied and safe in case of catastrophe.

Let’s talk about you

Tell us the problem you need solved. We'll get back to you!

Get IT news, views and the latest offerings from PAK Systems.